A life lived in tiny flats 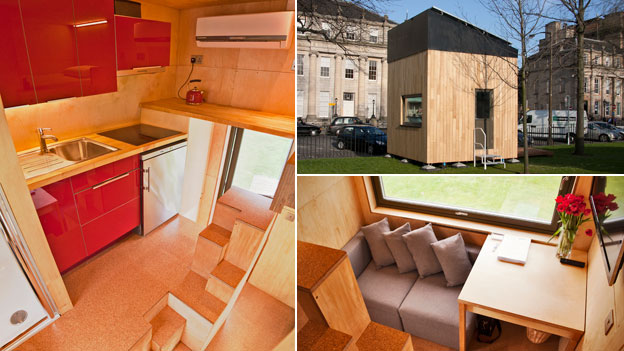 The UK has some of the smallest new homes in Europe. So how can people cope living in a small space?

Small is beautiful. But not if you have to live in it, a studio flat dweller might respond.

The UK has a housing crisis. A shortage of homes has pushed prices out of the reach of many hoping to get onto the ladder. But once they get there, they may be disappointed – the UK has some of the smallest properties in Europe.

Research from the Royal Institute of British Architects (Riba) says that lack of space is the most common cause of dissatisfaction people cite in relation to their homes. Almost half of people surveyed (47%) said there wasn’t enough space for furniture they owned, 57% said there was not enough storage space and 28% felt they couldn’t get away from other people’s noise.

There are minimum space standards for social housing, which covers council and housing association properties.

But while many people might associate London with tiny properties, the capital is the only place with minimum regulations for private new build homes.

Riba cited research showing that new homes in Ireland, Holland and Denmark were respectively found to be 15%, 53% and 80% bigger than those in the UK.

These may sound trivial amounts but 4 sq m is equivalent to having a sofa and small computer table in your house, Riba argues. And 8 sq m is big enough for a single bedroom.

The UK’s reputation for cramped new homes has led to what the Daily Telegraph dubbed “rabbit hutch Britain”.

Edwin Heathcote, author of the Meaning of Home, says that the volume housebuilders “try to squeeze in” as many units as they can into urban sites.

And unlike other countries, houses in the UK are sold on the number of bedrooms rather than square footage, he says. The result is a lot of small rooms. And UK consumers like gardens, which leads to smaller houses.

The rise of solo living is another factor. People wanting to live alone trade space for having their own flat.

Housebuilders reject the criticisms and claim that minimum space standards would push up house prices. “If you specify that rooms have got to be bigger then you will drive the price up,” warns Steve Turner, from the Home Builders Federation.

Happily living in a small home is first of all about psychology, says Hannah Booth, homes editor at Guardian Weekend. “You can live without much more than you think.”

Apartment dwellers in New York and Japan know the secrets of this lifestyle, she says. “They’re the masters, they eat out a lot, spend a lot of time in the park. In the winter your home can be a nice little cocoon.” 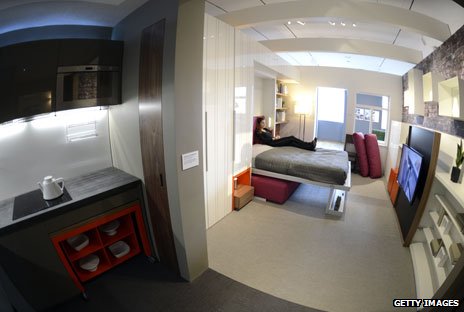 A wide angle lens is crucial for viewing some properties