Apart from Christmas and New Year, Holy week is one of the holidays that Filipinos look forward to. Holy week for this predominantly Roman Catholic nation means a spiritual and cultural journey commemorating the life and death of Christ. Churches open their doors almost 24/7 to devotees and visitors, while cities and towns organize weeklong activities and Lenten performances for the local community. There is absolutely no doubt that Holy Week in the Philippines is a big fete, and this is the same reason why balikbayans and foreign tourists are also eager to come home and take part in it.

Check out which destinations in the Philippines offer the most interesting religious experiences during Holy Week.

The Moriones festival commemorates the miracle of Longinus, the Roman soldier who pierced the side of the crucified Jesus. Longinus was blind in one eye. As blood gushed from Jesus’ body, a drop fell into his eye and restored his vision; eventually making him a believer of Christ and an enemy of Rome.

‘Morion’ means mask, and was once a standard part of a Roman soldier’s helmet. Thus, colourful Roman costumes, painted masks and helmets characterize this festival. Apart from several morion parades, mask paintings, and processions, one of the most entertaining activities in the festival is a re-enactment of Longinus’ story. Longinus runs around town, hiding inside houses and markets, climbing trees and lampposts, losing himself in the crowds of tourists just to escape the morions pursuing him.

The monastery of the Holy Eucharist in Lindogon, Sibonga is one of the largest monasteries in the entire Philippines, and home to the Marian monks. Many miracles have occurred here and that is why millions of devotees and tourists visit every month. It is also said that first-time visitors can make three wishes, which will be granted in time. Several prayer rooms, giant statues of the Virgin Mary, a gallery displaying images of the virgin from countries all over the world are also found in the monastery. Up in Cagayan Valley lies the Calvary Hills of Iguig, an 11-hectare rolling terrain where almost 6-meter high, colourful, and life-like statues depict the 14 Stations of the Cross. This has become a famous destination for pilgrims because of the many historic sites nearby dating back to the Spanish colonial era. Some these include the ruins of a Dominican abbey, and one of the few churches with buttresses left in the Philippines — the Church of San Antonio de Galicia.

The hills and mountains of Carmen are home to the Benedictine priests in Cebu. Here lies the Monastery of St. benedict where the miraculous image of Our Lady of Manaoag stands. Apart from a gallery featuring Jesus’ life and sacrifice, several rosary rooms, and a religious story in the monastery, you can also visit the hidden image of Our Lady of Immaculate Conception. Located at the mouth of the cave beside the monastery, you would need to trek a short but rocky journey to the huge statue of our Lady of Immaculate Conception.

Nourish your Soul! Nourish you Health! Do the Via Crucis or The Way of the Cross at Kawa-Kawa with you family. It’s a healthier way to do it. Be spiritually, physically and emotionally healthy!

If you want to see some of the Philippines’ extreme Lenten rituals and practices, you can head to Pampanga. Actual crucifixions and self-flagellations are common sights here especially on Good Friday. The Maleldo, a play re-enacting Jesus’ passion of the cross and crucifixion is done in several towns and cities including Cutud, San Fernando and Sta. Lucia. NOTE: This destination is not for the faint of heart.

Just an hour away from Manila, Laguna is an ideal destination if you want to practice the Visita Iglesia (a Lenten tradition requiring devotees to visit seven Christian sites or parishes). This is because Laguna is home to over 14 well-preserved Churches, displaying intricate baroque and renaissance architectural details.

The town of Paete, Laguna is known for its Lenten rituals too. During Holy Week, an old statue of the dead Christ is bathed. The water used to bathe the image is distributed to Paete townsfolk who believe it has healing powers. When the image is dry, it is laid in a tent filled with incense. In a ritual called Pasuob, people try to inhale the smoke (from the incense) because it is believed to cure any illness or disease. Paete is also known for its Lenten procession where religious statues are paraded around town in massive carrozas or carriages. 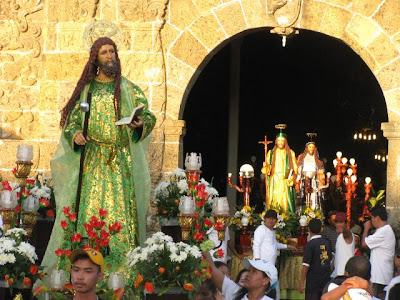 Marian devotees head north of Manila to Novaliches where the shrine of the Lady of Lourdes, a replica of that in France, can be found. The grotto, located beside the Basilica of Our Lady of Lourdes, is known to be a miraculous site, said to cure people who are sick. During Holy Week, masses are held in the famous grotto. If you do not have any plans during Holy Week, you can still enjoy the holiday by visiting the Churches around the metro. Manila hosts many historical churches in the Philippines including the famous Quiapo Church, the twin churches of our Lady of Loreto and of St. Anthony of Padua, the San Agustin Church, Malate Church, Paco Church, and the Manila Cathedral in Intramuros. These Churches are not only a place of worship, but also serve as heritage sites.

This Lenten season Manila Hotel offers the Visita Iglesia: Manila Revisited room package promo. This latest offering gives you a guided tour of Manila’s beautiful Basilicas and Churches. You will ride the tranvia and horse-drawn carriages as you go around the historical walls of Manila.

If you are exhausted from the tours, you can head to Quezon Cityat the National Shrine of Our Lady of the Holy Rosary, Santo Domingo Church where you can listen to the Siete Palabras. The Siete palabras will have eight priests, from various congregations, talking about their reflections on the seven last words of Jesus before He died on the cross.