FFE Magazine > Money/Business > Personal Finance and Management > How much is much when tipping?

How much is much when tipping? 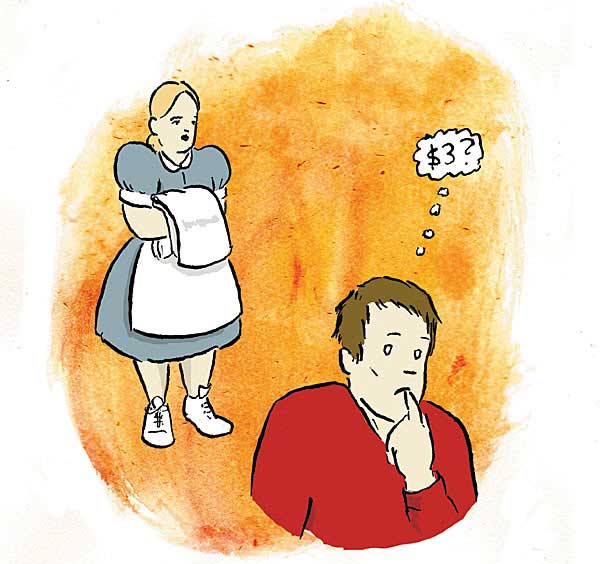 Tipping has become a common practice, or even habit, for many of us. We have become so accustomed to it that it hardly poses as a problem… except, maybe, when we are traveling.

During our travels, we often find ourselves second-guessing if we should tip. Sometimes we risk giving too much, or even offending others when not giving enough. This is why having an idea of a country’s tipping culture is important.

Europe is quite different from America and Asia, as tipping here is usually at your discretion. How and when you tip also varies between countries in the region.

Restaurant bills in Western Europe and Scandinavia often state ‘service included’ already. However, a few euros to a 10% tip (if the service is exceptional!) are often seen as kind gestures from guests and customers. For example:

In Sweden, there is no need to tip since service charge is listed on your check already. However, when dining at five star restaurants, you might have to cough up 5-10% of your bill’s total amount as a token of appreciation for the exceptional service rendered. When it comes to taxis, 15-20 krona is a kind gesture, but not expected by the driver. Similar to hotels, salons, and even the WC (water closet) or public toilet, tips are not required.

In Switzerland, there is no need totip those in the service industry. This is because in 1972, Swiss authorities mandated that prices be already inclusive of 15% service fees. You do not have to tip taxi drivers or salon personnel neither. However, keep in mind that though tips are not expected, they are always appreciated.

In Norway, tipping is seen as a voluntary gesture rather than a customary effort. This is why you are not expected to give any. When at a cafe, and you decide to leave a tip, small change (5 or 10 kroner) is appreciated. For larger bills in restaurants, you can round up the total and leave the change. For taxis, it is nice to round up the fare as well, and perhaps add 5 or 10 kroner, but it really depends on you. When at hotels, it is natural for hotel staff to assist and help you when carrying bags without expecting extra compensation. So do not feel the need to tip them. For haircuts, you can add 10 or 20 kroner if you like. For WCs, nothing is expected from you either.

In Holland, it is customary to leave 10% tips on the table after dining at restaurants or lounging at bars. For taxis, €1 is acceptable. For tours, hotel luggage boys, bellhops, and housekeeping staff, tips are given directly and may range from €2 to €7. Getting a haircut requires no tip. When visiting the WC, folks are obliged to give 50 cents to €1.

In Germany, it is good to follow this saying – “the bigger the bill, the better the tip!” When at restaurants, you should give about €1 per €20 of the bill, and this is usually handed directly to the waiter as you pay. For taxis, you must round up the fare to next Euro. If your journey was a longer one, it is expected you give more. Tips at the salon depend on what treatment you are getting, but if it is just a haircut €1- €2 is acceptable. For WCs, put 50 cents on the tip box or plate, if there is one.

In France, though service tax will be included in your restaurant bill, it is still expected of you to leave a 10% tip. If service is not included in your bill, then it is only appropriate that you should leave a 15% tip. Now if you are at a busy restaurant, give the tip directly to the waiter and say, “c’est bon!” They will appreciate this. If you are just having coffee at acafé, do not bother picking up your change, unless it is a big amount. Leave it for the waiter. For salons, €2 for haircuts and €1 for shampoo is expected. These should be handed directly to the salon personnel as well. If you are taking a taxi, round up your tip to thenearest Euro of your bill (ex. €17.5 go to €18). When staying at a small family-run inn or auberge for a week, try to leave at €6 for the family as an extension of your gratitude. It is common to give 50 cents when visiting WCs.

In Austria, add €2-€4 euros to the total of you restaurant bill (ex. If your bill was €35, give €38 or €39) Do this if the service was amazing. If you are just drinking coffee, just add a few cents to the total of the bill (ex. If your bill was €1.90, give €2). For hotels, it is normal to give €1- €2 per room/night, but you should give it on the first day so they will serve you better during the rest of your stay. Similar to German taxis, you should round up your taxi fare as well. When it comes to salons, it depends on what service you are employing but normally, €1- €2 tip is fine. You do not have to leave tips at shop or petrol station WCs if you have bought something. However, if you see cleaning person inside and you are pleased with the cleanliness of the WC, you can give a little.

It is more common to tip in the United Kingdom than the rest of Europe. If service charge or fees are included in restaurant bills, just give £1-£2. If service charge was not incorporated into the final total of your bill, give 10-15%. In London, 15% is customary, especially when you are in upmarket areas. Steves suggest that you should also be discreet when you give, as Brits, especially the English, do not like “big deals” made of anything. They prefer you leave the money on the bed or a table, when staying at hotels, or include it with any payment after saying, “keep the rest, please!” For example, if your taxi fare is £10, give a twenty then just ask the driver to give you an £8 change. He can keep the extra £2.

In Spain, you are never obliged to tip. The Spanish do not require you to tip according to any percentage of your bill’s total, except maybe in some restaurants that ask for 5–8%. Besides that, leaving coins is fine. For taxis and haircuts, coins, or no tips, are acceptable. However, if you are feeling extra generous give more. At hotels, you can give as much as you want to the bellboy or porter, housekeeping and receptionist. You do not have to leave anything at WCs too.

For Italians, a good tip is about 10% percent of your bill’s total. Restaurants generally expect this, and nothing less, from customers. It is also up to you if you want to tip taxi drivers in Italy. If you think they have been exceptional in their service, give €1 or €2. At hotels, you can also give the bellhops for carrying your luggage. Haircuts or any salon treatment do not require you, unless you are feeling generous and might want to. Typically, women tip the ladies that wash their hair. For public WCs, it is expected that you leave 50 cents to €1 to the woman collecting coins.

The Philippines is a little similar to much of Europe since tipping here is never mandatory.

Most bills, especially in restaurants incorporate a service charge, but it is optional for you to include a tip. €1 or €2 (1.00 Euro = 54.00 pesos more or less) is a reasonable amount, but if there is no service charge stated on the bill, leave a 10% tip or more. For hotels, a 10 percent service charge is usually included, but you should try to give porters at least €1 to €2 for each bag carried. The same amount is given to housekeeping staff, but only when you see them or when they leave your room.  If a concierge goes out of his way to secure you good tickets or reservations to a restaurant or show, give him €4 to €5.

When it comes to tour guides and private drivers, give the guides €20 to €50 and the drivers €4 to €5. No need to tip cleaners in washrooms, but you should give tips of around €1, depending on the distance and the traffic you encountered during the trip.