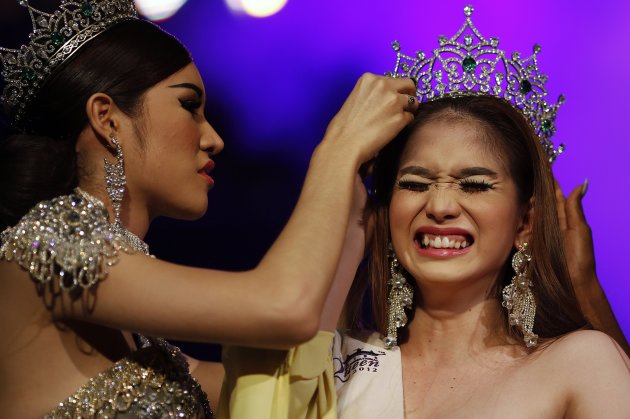 Seri Wongmontha, head of the panel of judges, said: "We really looked at her at the ?rst round, because she's lovely, and her personality is very personable, and the way she answered the question. She's really smart."

After the pageant, Balot said: "I'm very proud to be the ?rst here, and I hope my dad will accept me. Because in the family I'm the only boy, and my dad has big expectations of me. I made it. I won the International Queen Pageant, and I believe that my dad will accept me not only as his son but also as his daughter."

Twenty-one contestants from 15 countries dazzled at the Miss International Queen 2012 pageant held in Thailand's seaside resort Pattaya on Friday, vying for the crown in the annual competition for transvestites.

The ?nal contestants were selected from more than 100 entries from nearly 30 countries, and one contestant said the competition offered transvestites and transgenders a chance to show off their potentials.

"Someday I want to go to Europe and to represent my country the Philippines. So I'm so proud to present the beauty of the gays back to our country, the Philippines," said Balot, who had participated in three transvestite pageants in Philippines but was competing abroad for the ?rst time. As the winner of the Miss International Queen, Balot will travel to represent the transvestite pageant. She will also receive $10,000 (P411,000), a crown from a well-known gems store in Thailand, and other gifts. There were four Filipino transvestite contestants in the ?nal stage, but only two made it through to the ?nal ten. (Reuters)