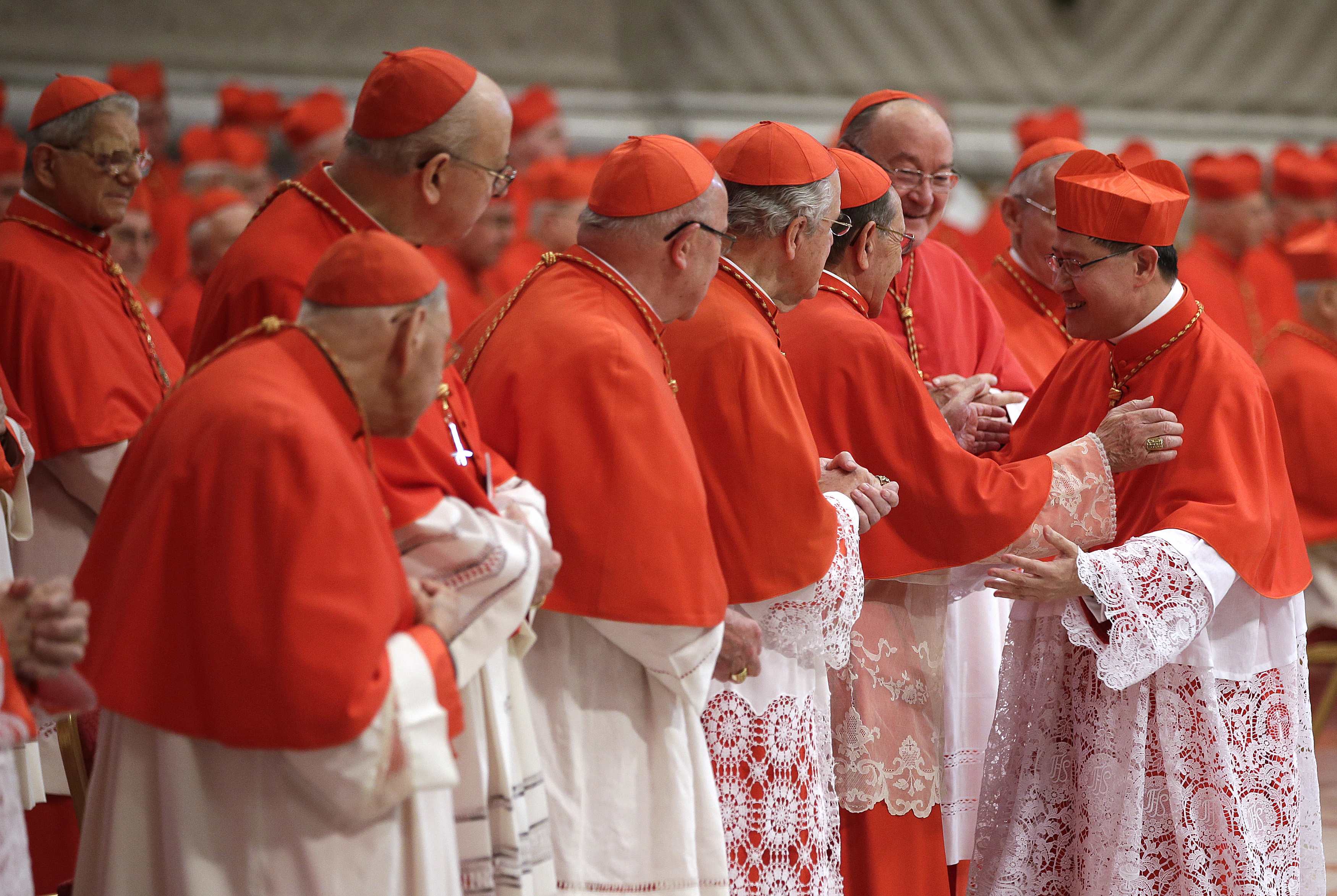 The Supreme Pontiff appointed the new 'Princes of the Church' during a ceremony in St. Peter's Basilica on Saturday (Philippine time) where they were given red hats and gold rings.

At around 6:40 p.m. (Philippine time) Tagle was imposed with the red biretta and ring. The newly installed cardinal became emotional when the Pope embraced him and touched his face.

The college of cardinals "presents a variety of faces, because it expresses the face of the universal Church," Pope Benedict said.His decision to elevate more non-Europeans to cardinal has been welcomed by critics concerned that the college has become increasingly Euro-centric under Benedict.
:
"In this consistory, I want to highlight … that the Church is the Church of all peoples," he said during the ceremony.
:
His fellow cardinals greeted the Manila Archbishop with embrace.
Apart from Tagle, the Catholic Church's second youngest cardinal at 55 years old, the five others elevated to cardinals were:
The newly-installed cardinals will be part of the elite body that advises the Pope. They will also elect the Pope's successor upon his death.
:
The newest group of appointees will bring the total number of cardinals worldwide to 120, including:
This is the second time within the year that the Pope appointed cardinals in a surprise consistory. The first was in February 22 this year.
:
Seventh Filipino Cardinal
:
Tagle, Facebook-savvy and known for his simplicity and humility, is the Philippines' seventh cardinal and has been touted as a papal contender.
:
With his appointment, the Philippines will have an active cardinal when Vatican convenes a conclave or the closed room gathering specially set aside for cardinals when electing a pope.
:
Having reached the 80-year-old threshold, the two other living Filipino cardinals are considered as retired and will no longer have a voting power in electing a pope. They are Archbishops Gaudencio Cardinal Rosales, 80, of Manila, and Ricardo Cardinal Vidal, 81, of Cebu.
:
Four other Filipino cardinals have passed away: Rufino Cardinal Santos; Julio Cardinal Rosales; Jaime Cardinal Sin; and Jose Cardinal Sanchez.
:
Papal contender
:
In October last year, a report of CathNews quoted CNN Senior Vatican analyst John Allen Jr. as saying the 54-year-old Tagle was not only "a rising star in the Asian Church" but also a "papal contender."In his blog on the National Catholic Reporter (NCR) on October 21, Allen said "a striking number of people who know Tagle believe that this is a guy who, one day, could be pope."
:
Allen shared an anecdote about the time the bishop rode a cheap bicycle to "a small chapel located in a run-down neighborhood" to say Mass at around 4:00 a.m.
:
"An astonished member of the congregation realized it was the new bishop, and apologized that they hadn't prepared a better welcome. Tagle said it was no problem; he got word late the night before that the priest was sick, and decided to say the Mass himself," Allen wrote.
:
Allen said Tagle was also known for inviting poor beggars outside the cathedral to share a meal with him.
:
Installed as Archbishop of Manila, Bishop Antonio Luis Tagle, has been tagged as someone who could be the next pope. He is known to go around the communities he serves on a "cheap bike."
:
Pride for Filipino Catholics
:
Vice President Jejomar Binay, who witnessed the installation of Tagle, noted that the event 'brings great joy and pride to Filipino Catholics.'
:
Binay was the President's special envoy to the public consistory rites.
:
"The installation of His Eminence Cardinal Tagle and the canonization of St. Calungsod are important events not only for the Catholic Church, which is celebrating this year as 'The Year of Faith,' but also for our predominantly Catholic nation," the vice president said in a statement.
:
In October, the world witnessed the canonization of St. Pedro Calungsod, the second Filipino saint.
:
Religious Life
:
Tagle was installed as the 32nd Archbishop of Manila in December last year, succeeding Cardinal Rosales.Before that, he was the bishop at Imus Cathedral for about 10 years.
:
According to the Catholic Bishops Conference of the Philippines (CBCP), Tagle was born in Manila on June 21, 1957.
:
He was ordained a priest on February 27, 1982 and then as a bishop on December 12, 2001.
:
Tagle took his philosophy and theology studies at the San Jose Major Seminary based at the Ateneo de Manila University.
:
He earned his doctorate in sacred theology from the Catholic University of America in Washington D.C. in the United States from 1985 to 1992.The Manila Archbishop is the chairman of the CBCP's Commission on Doctrine of the Faith.
:
Tagle has also been a member of the International Theological Commission of the Vatican since 1997.
:
GMA News with a report from Agence France Presse/VVP/ELR || Nov. 24 6:40 pm