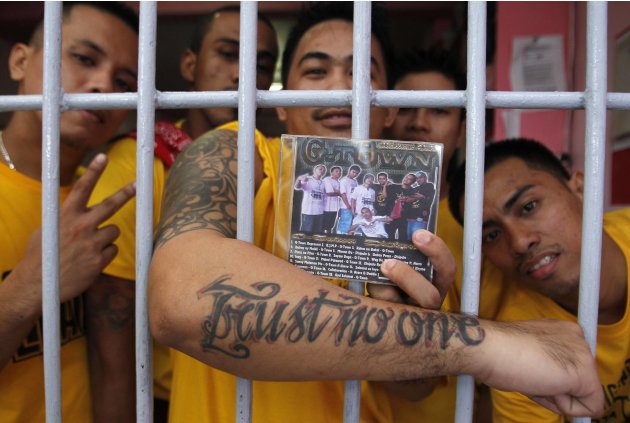 Inmates display their rap album, which they composed and recorded while in jail, at a district jail in Olongapo City, north of Manila, October 27, 2012. A group of detainees recently released an album containing 18 songs they personally composed while behind bars. Each of these songs detail their life inside prison and their longing for freedom as they continue to serve time.

OLONGAPO CITY, Philippines – Several inmates doing time for crimes ranging from robbery to drug abuse at the Philippines' Olongapo City Jail, a city 80 km (50 miles) north of Manila, have found a release in music.
Soul-searching after their run-ins with the law led nine young inmates to rap success with an album launch.

The men aged between 19 to 29 years of age are part of a group called Pamilya Trese, which means Family 13. The band originally had 13 members until four prisoners were released.

They write songs with titles like "Buhay Preso" (Life in Prison), which details their time inside jail, and "Buhay ay Maikli" (Life is Short).

"The youth are extraordinary, whoever faces us will be fazed," a verse from the song "Collaboration" goes, "I face the challenger, I don't ever hesitate. We stand on our foundation, we have skin that can resist. Join us, dude, and let us see if you are strong".

Ray Mose, who is 26-years-old, is also known as "Dave Rappa" among his fellow inmates. He is in jail for illegal drug use.

"Rap music can help relieve pain and loneliness, which is why a lot of people are more open to rapping," Mose said.

All of the detainees, except for the lead vocalist Jay Manuyag, were unfamiliar with the music genre. But then the rap bug bit, and since 2010, the group has been writing lyrics on notebooks and exchanging beats.

In a span of about two years, Pamilya Trese composed and recorded 18 songs, with themes based on repentance and redemption.

A crowd favourite entitled "Ina" (Mother) is an apology to their mothers, asking forgiveness for their criminal pasts, with lyrics like "And I'm here, waiting, will you be gone? I had gone astray, why did I end up this way?"

The inmates recorded the songs inside the jail, without the benefit of high-tech mixers and sound engineers. Friends from outside the jail lent a used laptop and a microphone.

Jail warden Andrew Tauli first heard the group perform in a talent show inside the jail. He saw the exercise as a form of rehabilitation, and supported the album's production.

"It's challenging, because it's not easy to learn rap. You need to have the skills. In that manner, we can somehow help develop it through our routine exercises," Tauli said.

The warden said the rappers could also gain international acclaim, like the inmates of Cebu Provincial Jail, who became an overnight sensation for their carefully choreographed Michael Jackson performances that went viral on YouTube.

Members of a book-reading advocacy group visiting Olongapo were invited recently to watch a performance.

Radio stations in Olongapo, once known for its red light district frequented by U.S. soldiers from the Subic naval base, received copies of the album, and the inmates' music has been playing on the airwaves.

Jay Manuyag said their small success could be an inspiration for other detainees.

"Just like what we've done, others should find a way to achieve their dreams because these bars are not a hindrance to attain them," Manuyag said.

The CDs are available at the city hall for free, and Pamilya Trese is already planning on recording its second album.