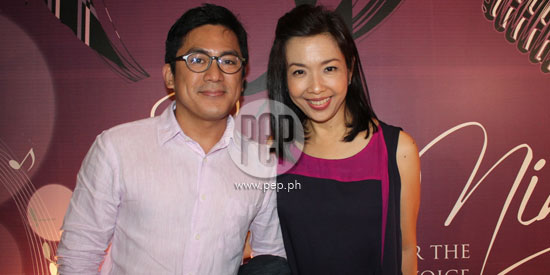 Married couple Robert Sena and Isay Alvarez were part of the original cast of Miss Saigon which first premiered in London in 1989. Isay's tips for those interested in joining the auditions? "Number one, triple threat, e. Kailangan sumasayaw ka, kumakanta ka, umaarte ka. So medyo ang weakness ng mga Pinoy ay dance. Dapat ngayon pa lang bina-brush up niyo na yung mga dancing skills n'yo. And of course take voice lessons, very important yun."[/caption] West End is prepping up for the restaging of Miss Saigon next year, more than two decades after the musical first premiered in London in 1989. Producer Cameron Mackintosh has decided to go back where he discovered many of the original cast members and will be conducting the Manila auditions from November 19 to 22.

Then an 18-year-old girl, Lea Salonga brought prestige to the Philippines by landing the lead role Kim due to her remarkable talent as a stage actress.

Also part of the original cast were thirteen other Filipinos including Monique Wilson, Isay Alvarez, Robert Sena, Pinky Amador, and Leo Valdez. PEP.ph (Philippine Entertainment Portal) had an interview last November 7 with Robert Sena and Isay Alvarez at The Manila Peninsula Hotel for the Sing @ Ning Search for the Ultimate Voice where they acted as judges. As part of the original cast of Miss Saigon, the couple encouraged Filipino performers to join the auditions. Robert said, "Actually, I'm telling the next generation to audition for that. Not only that they'll earn but also the experience to perform sa ibang bansa and a chance to study, as well. Makikita mo yung ibang perspective ng musical theater. Isay, on the other hand, did not hesitate to share some tips on how to make it to cast list.  "Number one, triple threat, e kailangan sumasayaw ka, kumakanta ka, umaarte ka.  So medyo ang weakness ng mga Pinoy ay dance. Dapat ngayon pa lang bina-brush up n'yo na yung mga dancing skills n'yo. And of course, take voice lessons, very important yun," she pointed out. She may have already been a seasoned theater actress in local plays before joiningMiss Saigon, but Isay still went through a lot of training when she was in London. She recalled, "Well, I used to dance before a lot. When we were there, I would take dance classes in between shows. Kasi yung mga kasabay namin are all graduates of performing arts so we have to level up with them. "And we would take voice lessons also."

Miss Saigon, written by Claude-Michel Schonberg and Alain Boublil, is set in the city of Saigon (now Ho Chi Minh City) during the Vietnam War.

A love story between a Vietnamese bar girl who fell in love with an American GI, the musical cast Asian theater actors to play the role of the Vietnamese characters. But for the musical's revival next year, the auditions will only be held in two cities around the world: London and Manila. PEP asked Robert and Isay how they feel about this. Robert answered matter-of-factly, "Alam mo, wala naman na silang nahanap sa ibang bansa na, e. Bumalik sila sa dati nilang… kung saan na-discover yung mga Pilipino na nag-perform na nagbigay ng prestige sa ating bansa." Isay added, "Kasi may nag-post ng tips ng Miss Saigon when they were looking for the person who will play Kim. Talagang they really went around the world. And they realized na all the finalists, may dugong Pinoy, e. So that's why they came here and now they're coming back here. And it would be very, very good for our performing artists also to be part of it." The couple admit people approach them to be mentored since they have actually established a performing arts school. Isay said, "Because we have Spotlight Artists Center, so there you can take voice lessons. I think you really have to prepare for it. Hindi puwedeng just because you have the talent. You have to know how to handle and audition, like pagharap mo sa kanila, baka siguro natunaw ka na. Ngayon pa lang, tunawin na natin!" Robert said there's a certain "mold" the producers are looking for.

"So maybe because of years na ginawa ko siya, very familiar ako sa hinahanap nila," he said. More than the money they earned after performing in West End, the couple believe being a part of Miss Saigon brought a lot of pride to the country. Isay stated, I think it's the prestige na napakaganda ng naibigay sa amin, yung first batch of Filipinos who went there. "In the beginning, parang hindi nila alam na may Pilipinas pala. At hindi nila alam na merong mina ng talent dito sa atin." Robert added, "Ako rin, naniniwala. Marami pa diyan. Naku, umaapaw talaga ang talents ng Pinoy. "And I truly believe, someday, we will have our own identity na katulad ni Gangnam [Psy], similar to that. I believe in that. "It's just that, we have to find yung originality natin. "And the thing with Miss Saigon kasi, original siya, wala siyang pagkokopyahan, so yung talent mo, yun talaga. "Pero ang secret? Walang lalamya-lamya, yun talaga," he asserted. With the musical's restaging next year, Isay admitted, brings back fond memories. She said, "I would always say, best years ng buhay namin, dun sa London. "Naaalala ko kung pa'no ako niligawan ni Mr. Sena. Hahaha!" "At kung papaano kami naghanda papuntang London na parang probinsiyano na pupunta ng ano, alam mo yun? We really enjoyed our journey together, kaming mga original casts." Are they planning to watch the auditions? Isay replied, "May plano kaming mag-hello kina Cameron and to thank them for coming again to to the Philippines. Yun, gusto kong mangyari yun." Robert said, "Naniniwala akong may reunion kami, yeah.Exciting for Filipinos to do that again." "Kami, okay na kami, rest na kami. I'm happy for the next gen of this production talaga. They should do it. "Wala na yung parang makabayan ako dito. It's not that. You go there to study more." Isay also has a message to those who are aspiring to become the next Kim or even just a part of the cast. "Pero kasi yung iba, marami akong naririnig na they want to audition, but they haven't really started preparing really. We're just here, we can help you. We can give you tips," she said. If they don't make it through the auditions, should they be disappointed? Isay answered, "Ay, hindi talaga. Kasi kami, tumanda na siguro sa pag-o-auditions So, pag hindi ka natanggap, ibig sabihin, hindi ikaw yung hinahanap. Meron silang hinahanap na wala sa 'yo. "Maybe sa ibang productions, or maybe you should prepare more. "You should prepare more para dun sa role. Ganun lang yun."