Romance in the movies

Love is a universal phenomenon that is why everyone enjoys a good romance film. But as Filipinos and hopeless romantics, we do not just enjoy romantic films – no, we live and breathe it. Perhaps that is why “love teams” are quite popular in the country. Teens that appear as couples in romance films always gain groups of supporters who practically swear on their ancestor’s grave to remain eternally loyal to their favourite stars. These supporters visit every press conference or mall show to see their beloved love team hold hands or sing together. Although many of these love teams are for mere show, we understand that there is nothing wrong with celebrating love or romance.

Romance films, love teams, kissing scenes – all give us hope and satisfaction that life can offer us the same kind of love and happiness one day. As the saying goes with hope, anything is possible.

Let us look back at some of the best Filipino romantic films ever made. These films have entertained us, touched our hearts, widened our smiles, and reminded us that love and romance do not just exist in film reels or the silver screen, but they too can happen in reality

SYNOPSIS: The central characters, Gabriel (Gomez) and Carmina (Zulueta) are introduced as children. Gabriel, a peasant boy of twelve, is picked off the streets by the Salvador clan to become an adopted son. Carmina is thrilled with her new “brother” but her blood brother Milo begins to be filled with jealousy and resentment towards the new family addition. When Gabriel and Carmina grow up, the passion of their great love challenges the claustrophobic structures of social order, propriety, class system, and strict family tradition. However, reality intrudes and the lovers part. Gabriel, moved by bitterness, returns to exact revenge on all. Tragedy strikes, and both the innocent and the guilty are swept by the violent surge of lust, passion, remorse, and retribution. WATCH FILM CLIP HERE 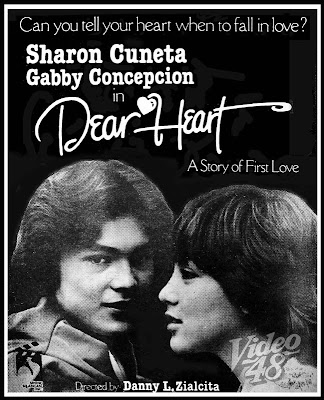 OVERVIEW: Released in 1981, Dear Heart is the hit debut movie of Sharon Cuneta about teenage love. The movie is directed by Danny Zialcita. It is also the first Sharon Cuneta – Gabby Concepcion pairing in the big screen.

SYNOPSIS: April (Sharon Cuneta) is a "papa's girl" and comes from a very wealthy family. She always obeys the orders of her father, Don Manolo (Eddie Garcia) but upon entering college she starts to realize that she needs her freedom. She falls in love with Jimmy (Gabby Concepcion) and starts to disobey her father. She even does tricks to her meddling nanny so she and Jimmy could see each other. Due to her father's strict orders, the young lovers have difficulties dating each other. On April's 16th birthday, her father thought it would be best if April could finally live the life she wants. WATCH FILM CLIP HERE 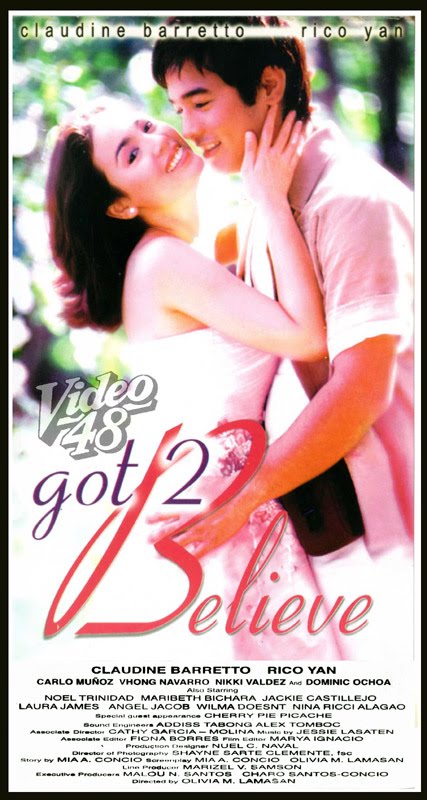 OVER VIEW: Got 2 Believe is a romantic movie released in 2002 by Star Cinema and directed by Olivia Lamasan.

SYNOPSIS: Toni (Claudine Barretto), is a wedding coordinator who believes in true love, and Lorenz (Rico Yan), is a photographer who does not believe in happy endings. Toni is considered by her married sisters, aunts, and friends to be an "old maid" – always the bridesmaidbut never the bride! Toni is still holding out for Mr. Right. However, their family believes that a female must be married on or before reaching the age of 25, otherwise she will end up being single and an old maid. Toni and Lorenz hate each other but when Lorenz is presented with an opportunity to be featured in an international magazine he ends up asking Toni for a favor. In return he sets up various dates for Toni and strives to teach her the right moves and manners when dating. Soon, Lorenz becomes close to Toni and he starts to fall for her. WATCH FILM HERE OVERVIEW: Kung Mangarap Ka’t Magising is a light-hearted coming of age movie about love and the vulnerability of youth. It is directed by Mike de Leon.

SYNOPSIS: Joey (Christopher de Leon), is a ‘burgis’ good-looking kid studying or perhaps more accurately, bumming around in Baguio to escape the responsibilities of growing up. He likes music and tinkers with the piano once in a while, dreaming to become a songwriter one day. While in Baguio he meets Anna (Hilda Koronel), and there is instant attraction between the two. There is only one or perhaps two problems. Anna is married and has a kid. But as it turns out, her marriage is on the verge of collapse and she finds momentary solace, a ‘moment in a stolen dream’ in the carefree Joey. WATCH FILM HERE 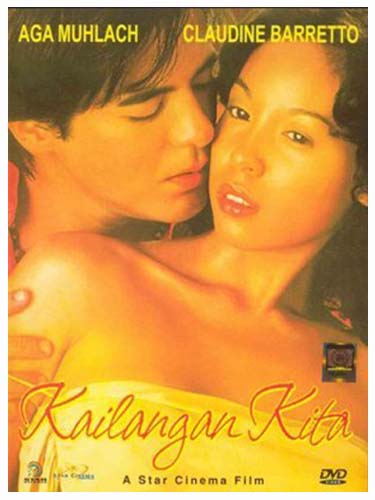 OVER VIEW:  Kailangan Kita is a 2002 film that tackles a beautiful love story shot in the province of Bicol. This movie is under Rory Quintos’ direction and produced by Star Cinema, ABS-CBN film productions.

SYNOPSIS: New York-based celebrity chef Carl Diesta (Aga) is coming home to the Philippines after being away for seventeen long years to marry his fiancee, supermodel Chrissy Duran, in her hometown of Albay province in the Bicol region. With Chrissy still being held up somewhere in Europe for a photo shoot, Carl has to meet her family by himself and instantly impresses everyone except for Chrissy’s father, Papay Rogelio. Here Carl gets to meet Chrissy’s other sister – Lena (Claudine). Through Lena, Carl has now come to terms with his forcibly forgotten identity – both as a son and as a Filipino. Lena has also awakened a love in Carl that he has never felt before. WATCH TRAILER HERE 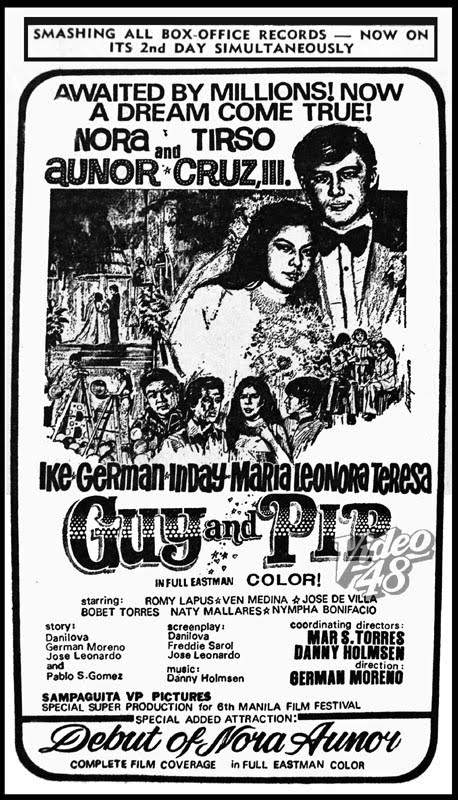 OVERVIEW: Guy and Pip was shown in cinemas for 6 months, had an unprecedented record-breaking box-office P8 M gross and was seen by more than 4 million Filipinos. The film is directed by German Moreno.

SYNOPSIS: Nora Aunor and Tirso Cruz III star in this teenybopper film about young love. The film is almost like a music video with the supreme love team continuously singing popular love songs to each other. WATCH FILM CLIP HERE 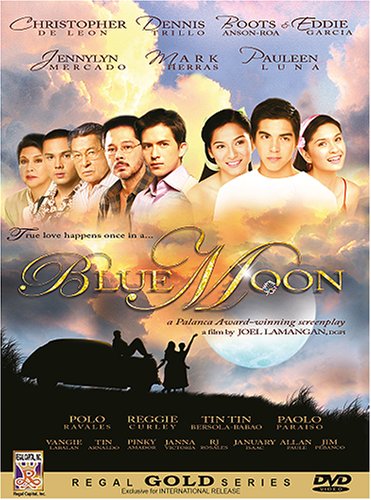 SYNOPSIS:  “Blue Moon” follows Manuel, a dying old man and his search for his love named Corazon all over the Philippines. He’s joined by his emotionally distant son Rod and recently separated grandson Kyle. As Rod and Kyle accompany Manuel in his search for his ladylove, they discover that there were actually two ladies named Corazon in Manuel’s life: the nurse whom Manuel married after World War 2, and the spunky girl who was Manuel’s first love in 1938. The blossoming of young love between the dashing young Manuel and the two Corazons in the Forties is counter pointed with the dying Manuel’s search for his one true love in the present day. But which Corazon is it, and will he find her before he joins his Creator? WATCH FILM TRAILER HERE

OVERVIEW: This was a remake of the 1970s drama film directed by Lino Brocka. Unlike the original, the 1996 version is a light-hearted romantic comedy.

SYNOPSIS: A 30-year-old widower (Christopher De Leon) realizes that his three children need a mother figure. His youngest daughter feels lonely and finds it hard to cope with schooling. He scouts around for a tutor for his daughter, someone who could also act as her playmate and friend. The lady (Regine Velasquez) who arrives — a cheerful singer and tutor — brings light to their home. Eventually, the father falls in love with her. WATCH FILM HERE 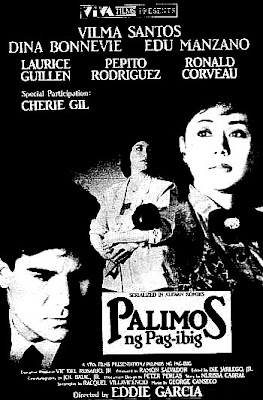 OVER VIEW: Palimos ng Pag-ibig was from an original story by Nerissa Cabral. This movie was home of the famous tagline: “Para kang karenderiang bukas sa lahat ng gustong kumain!” (You are like a restaurant that is open to anyone who wants to eat!), In context of prostitution reference.

SYNOPSIS: On the outside, Fina and Rodel’s marriage is a match made in heaven; but behind the thick walls of what they call home, their relationship is on the verge of crumbling. For all their affluence, the couple’s lives remains empty. Devoid of a child to call their own, any attempts they make to conceive may prove fatal to Fina (Vilma Santos) due to her medical condition. In an act of desperation, Rodel (Edu Manzano) takes matters into his own hands and seeks the services of a surrogate, Ditas. The plan goes awry when Rodel becomes genuinely attracted to the younger and more alluring Ditas (Dina Bonnevie) while Ditas, who has lived a destitute life, finds the notion of prosperity equally irresistible. The well-intentioned plan to resuscitate life back into a dying marriage may become its undoing. WATCH FILM CLIP HERE 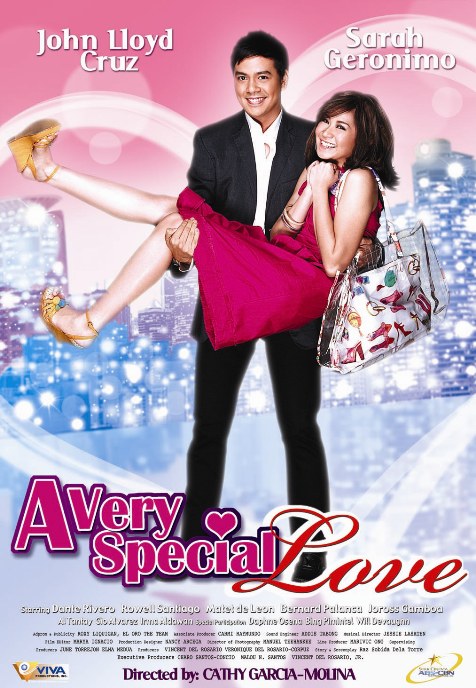 OVERVIEW: A Very Special Love is a comedy romance film produced by Star Cinema and Viva Films, starring John Lloyd Cruz and Sarah Geronimo. This movie was directed by Cathy Garcia Molina and had received an “A” rating from the Cinema Evaluation Board.

SYNOPSIS: Miggy Montenegro is the youngest of the Montenegros, an influential family in several business industries in the country. Laida, raised in a modest home, dreams of nothing but Miggy and hopes that she can meet him someday. This pushes her to apply as an Editorial Assistant in “Bachelor,” a men’s magazine managed by Miggy. But as she interacts with her dream man in the workplace, she realizes that he is not the person she expected him to be. The real Miggy Montenegro is hotheaded, insensitive, and tends to push people away from him.

Laida tries to help him change. She constantly tries to make Miggy smile, and for a second seems to succeed. However when Miggy is reminded of the conflict within his family, he begins to go back to his old ways. It seems as if Laida’s efforts are not enough to soften Miggy’s heart, or are they? Will Laida ever get her happily ever after? WATCH FILM HERE