(Reuters) – Two female members of Russian punk group Pussy Riot convicted of protesting against President Vladimir Putin in a cathedral have been sent to prisons far from Moscow despite requesting to serve out their terms in the capital, a lawyer said on Monday. 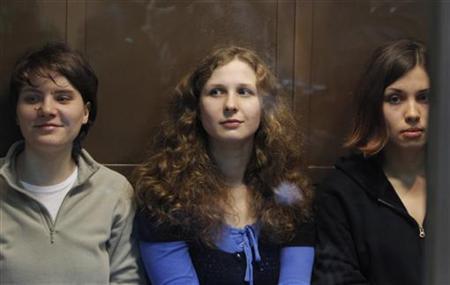 Maria Alyokhina, 24, and Nadezhda Tolokonnikova, 22, were convicted of "hooliganism motivated by religious hatred" in August and sentenced to two years in jail, a punishment that many in the West said was too harsh.

Their stunt – bursting into Moscow's main Russian Orthodox Cathedral to urge the Virgin Mary to rid Russia of Putin – infuriated the church and many Russians. But Kremlin critics said their trial was part of a crackdown on dissent orchestrated by Putin, who began a six-year presidential term in May.

The two women lost their appeals on October 10.

The women's lawyers said they had tried to argue that they should be allowed to remain in jail in Moscow, saying it would have permitted them to be closer to their small children. They had also cited health and safety concerns at far-flung penal colonies.

"They have been sent away," one of their lawyers, Mark Feigin, told Reuters, saying he did not know where the women had been dispatched. By law, relatives must be informed once a convict arrives at a prison, but the trip can take days.

One women's prison is about 100 km (60 miles) from Moscow, but most are much further away.

Former collaborators in a street-art group said on Twitter that Tolokonnikova had been sent to Mordovia, about 500 km (300 miles) east of Moscow, and Alyokhina to the Perm region, near the Ural Mountains about 1,100 km (700 miles) east of the capital. That was not confirmed.

The duo had been held in a Moscow detention center since their arrests in March. Western governments and musicians like Madonna had said their sentences were disproportionate, but Putin voiced support for the sentences, saying the state must protect the feelings of the faithful.

The dominant Russian Orthodox Church has cast their protest as part of a concerted attack against the church and Russian traditions.

A third convicted member of Pussy Riot, Yekaterina Samutsevich, was released on appeal when a court suspended her sentence after her lawyer argued that she had been pulled away from the cathedral's altar before the protest song began.