FFE Magazine > Entertainment > Sports > Will it be a K.O. for either Manny Pacquiao or Juan Manuel Marquez?

Will it be a K.O. for either Manny Pacquiao or Juan Manuel Marquez?

Boxing fans from all over the world will be on their feet once again as champions Manny Pacquiao and Juan Manuel Marquez meet in the ring for the fourth time. 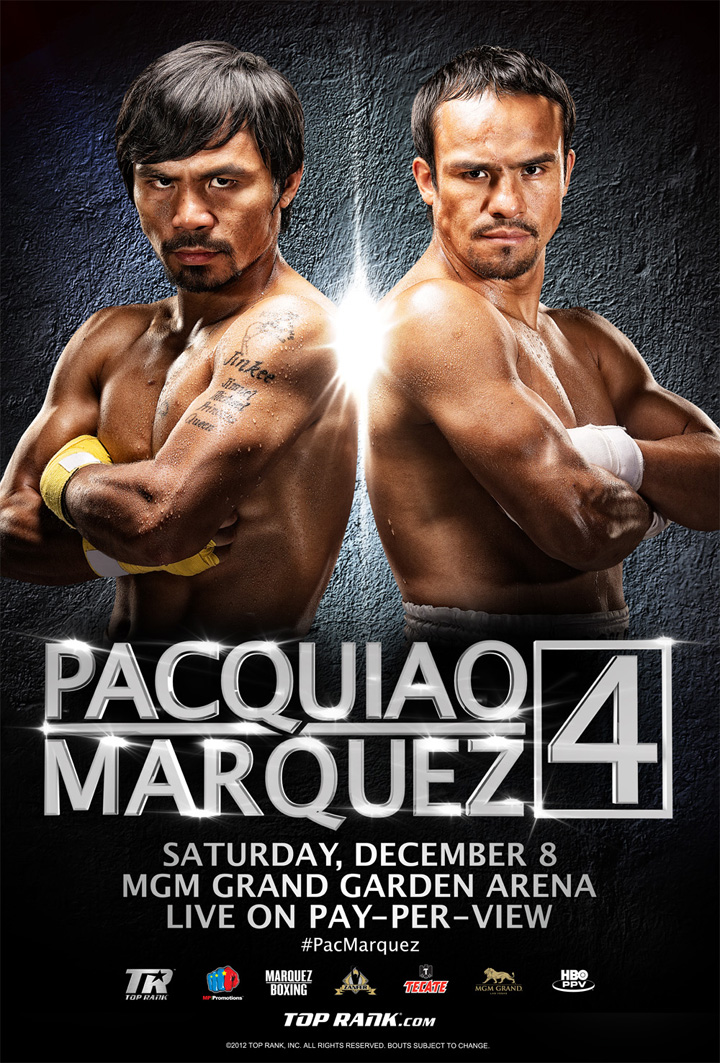 This coming Saturday, December 8, at the MGM Grand in Las Vegas the Philippine fist Manny Pacquiao will fight in a rematch against Mexican champ Juan Manuel Marquez. Many are excited, as the last three fights between the two boxers have been controversial. To refresh everyone’s memory, the last three matches have resulted in a draw, a split decision to Pacquiao and a majority decision to Pacquiao.

This time around however, Pacquiao and Marquez have publicly stated that they are both gearing for a knock out to assure a clear victory, without the outcome coming from the judges’ table.

In a recent interview, Manny Pacquiao has already stated that he did not want the people watching this fight to be just satisfied.  He has repeated that he does not care about the belt or the money, only the win.

Similarly, Juan Manuel Marquez has also stated that he has won all of the last three fights, and would like the referee to raise his hand once again – that he has take it out of the judges' hands this time.

Most fans and media have favoured Pacquiao in the last decade, but lately the majority are predicting for a Marquez win. Commentaries suggest that Pacquiao has remained stagnant, if not slowing down, over the last several years as he recently came off a majority decision loss to Timothy Bradley in June. Meanwhile, ­ everyone is noticing Marquez’s change in appearance and attitude since coming from a unanimous decision victory against Serhiy Fedchenko last April. Marquez’s fiery disposition appears to be hungrier and more focused than team Manny who, according to US-based Anthony Andales, a reliable roving boxing correspondent, does not have the heart for boxing anymore.

Joseph Santoliquito, RING Magazine’s Managing Editor agrees, “You get the sense these two will be fighting until the end of days. Finally, hopefully, Marquez gets a break. I felt he beat Pacquiao in at least two of the previous three fights, including the last one. Pacquiao looks shopworn, at least at this elite level. He seems to tire more quickly, and it may be because all of the multitasking outside the ring has caught up to him and is taking a toll. It will be another close fight, but it is also a fight that has lost the luster it once had. Marquez W 12 Manny Pacquiao (116 to 112).”

Other experts suggest otherwise or another possible draw.

Christina Thomas from boxinginsider.com highlights Pacquiao’s left hand as the boxer’s ultimate weapon, basing it on the third match between Pacquiao and Marquez, where the latter was floored by the Pac-man’s explosive left hook. She says, “Some things to take from this development is that no matter how good Marquez’s counterpunching technique is, Pac-Man always has that left hand weapon, coupled with great body movement and the ability to shake off damage, that makes him the favorite on Dec. 8 – even though Marquez still has the overall edge in boxing skill.”

According to Josh Schoch, a featured columnist for bleacher report, a top sports media destination, the outcome of the fight might result to Pacquiao winning another split decision. He adds, “These two fighters know each other well, and neither is likely to make a big change before the fight. Because of this, Pacquiao will get out to a fast start like usual, but Marquez's stamina will help him battle back. As always, the result will be in dispute, and the boxing world will never know which of these two fighters is truly better.”

For both boxers, it is certain that the outcome rests with a K.O. from each of their bruised hands. Both want and will claim the victory as this battle was arranged for so much more than a belt or a prize. Whatever the result, a sure spectacle in the world of boxing will be made on December 8.

But no matter what happens, we will be rooting for our very own pound-for-pound hero!