9 October 2012
by FFE Entertainment News Staff
(Reuters) – Judy Garland's blue-and-white pinafore from the beloved classic "The Wizard of Oz" is going up for auction, where it is expected to sell for more than a half a million dollars, auctioneers said on Monday. 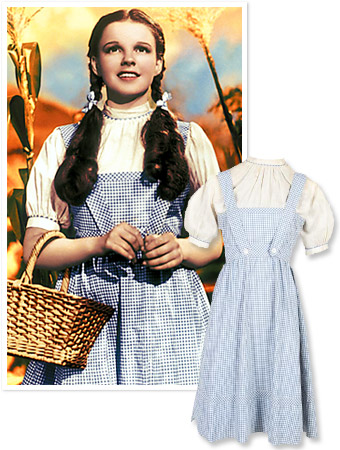 The outfit, consisting of the gingham dress and white puffy-sleeved blouse, which Garland wore throughout the 1939 film, will be sold next month at Julien's Auctions in Beverly Hills, the auction house said in a statement.

Julien's estimated the outfit would sell for between $400,000 and $600,000, but similarly iconic Hollywood costumes have fetched many times the pre-sale expectations in recent years.

President Darren Julien told Reuters the dress, by MGM's famous costume designer, Adrian, had not been offered for sale, nor even publicly seen, since MGM costume designer Kent Warner sold it at Christie's in 1981.

"It's one of those key pieces that I'm sure collectors all over the world are going to be after," said pop culture expert Laura Woolley of the Collector's Lab, an appraisal service for collectors, museums and other institutions, in a YouTube clip posted by Julien's.

"This is one piece that everybody recognizes instantly," she said of the dress prominently featured in the Technicolor musical, which is still hugely popular with both children and adults nearly 75 years after it was made.

At the same sale of costumes from film star Debbie Reynolds' collection, which took in nearly $23 million, Marilyn Monroe's iconic "subway dress" from 1955 movie "The Seven Year Itch" sold for $4.6 million, or $5.5 million including commission and tax.

The "Wizard of Oz" dress will go on public exhibition at Julien's in Beverly Hills from November 5-8 ahead of the two-day auction.

Other Hollywood memorabilia on offer at the November 9-10 sale include the white strapless Edith Head gown worn by Elizabeth Taylor in "A Place in the Sun," which is estimated at $20,000 to $30,000, and a Cecil Beaton triptych of Marilyn Monroe, which hung in Monroe's New York apartment, estimated at $35,000 to $40,000.