Inspired by Superman and Captain Marvel, Mars Ravelo began conceptualizing a female superhero called “Kamangha-manghang dilag” or The Amazing Warrior Princess. He created a super heroine that combined Superman’s powers with the real-life qualities of his own hero, his mother. Publishing companies rejected his concept several times believing that a female superhero would not sell to the public. It was then that Ravelo was forced to shelf his idea until one publishing company, Bulaklak Komiks (Flower comics) agreed to publish it in 1947. During this time, Darna did not yet exist as Ravelo decided to call this super heroine “Varga.” 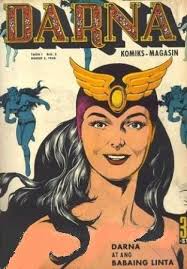 After an argument with his editor, Ravelo left Bulaklak publishing. Since Varga was under Bulaklak’s copyright, Ravelo changed Varga’s name to Darna.  Darna made first appearance in Pilipino Komiks (Filipino comics) on May 13, 1950 and the rest was history.

The legend begins as Darna’s alter ego, Narda, and her brother Ding were playing “hide and seek” one night. As the two orphans were playing, Narda sees a shooting star fall from the sky. Narda chases it and finds a celestial object, a white stone, with the words DARNA engraved. As she heard her playmates approaching, Narda quickly hid the rock in her mouth. However, the rock came alive and forced itself down Narda’s throat causing her to have flashing images of aliens and a galactic world far away, which eventually made her faint. When Narda regained consciousness, she told her grandmother about the white object she found. As Narda says the name written on the rock, she magically changes into the super woman, Darna.

Darna tells Ding and Narda’s grandmother that she is an alien warrior from the planet Marte. She explains that she was sent to earth to fight all evil forces that threatened the world. These included both supernatural forces and the common criminals.

Narda soon takes on the responsibility of becoming Darna in order to protect the world. She also realizes that since swallowing the white stone, Narda can easily transform in to Darna, and vice versa, by shouting her name.

Darna has graced Philippine culture in a variety of ways. Besides being a comic book heroine, Darna has also been portrayed in television series, movies, adverts, dances and songs by some of the biggest names in Philippine arts, music and film industry. On the silver screen, the biggest names to portray Darna include Lorna Tolentino, Gina Pareno, Anjanette Abayari, Alma Concepcion, Daisy Reyes, Angel Locsin, Marian Rivera, Rio Locsin, Vilma Santos, and even the Philippine comedy King, Dolphy.

There have been many incarnations of Darna and changes in the original plot to fit countless television and movie remakes. Yet Darna remains to be one of the Philippines’ favourite superheroes showing that in the fight against evil, women can kick serious butt.

WATCH THE FULL MOVIE OF DARNA AND THE GIANTS (1973)